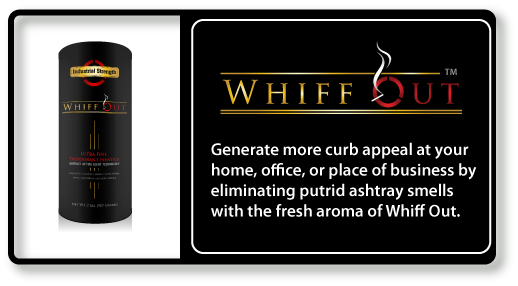 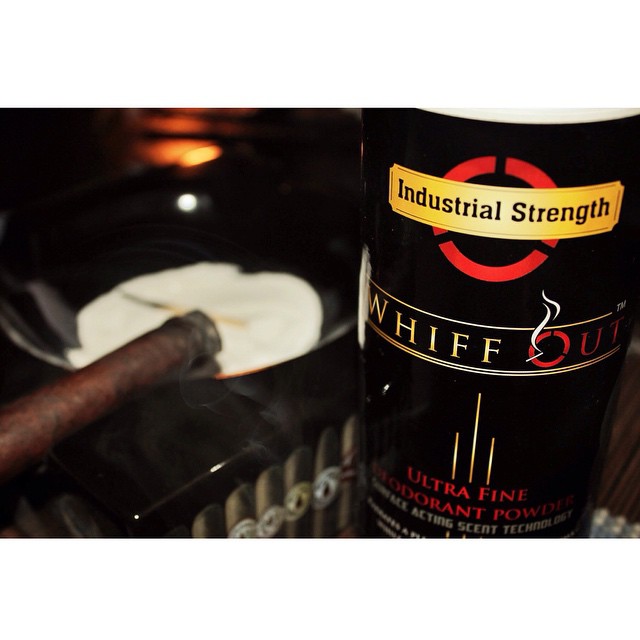 Removing the smell from your smoking room

In Canada it gets cold in winter. Very cold. Some days get as low as -35 degrees Celsius even in Toronto, which is at the southernmost end of the country, while it can be even colder in our other major cities. With a little bit of wind this means frostbite sets in in just 15 minutes.

So where do we smoke?  Not outside!  For me I’ve fully insulated my garage and converted it into my mancave. There’s heat, couches, TV, carpeting, tables – it’s my man cave. And it’s big enough that my car can still fit in there.  The problem? Four guys smoking in that room for 3 hours makes for a smelly room – despite the large exhaust fans I have to pull the air out of the room, and despite the air filter I have inside the room.

When I came across Whiff Industries on Instagram, a product to remove the smell from ashtrays, I decided I’d give it a shot to see how well it worked.

I put about 1/2″ across the bottom of my table top ashtray and got to work smoking, ashing onto the white powdery sand at the bottom. The next day I returned to the room to see the results of my test.  I was surprised to see how much it had actually absorbed.

I tried in in my car’s cupholder ashtray – just a couple of tablespoons worth – and had a cigar on the way home. When I got home I did something I never do – I left the ashes and cigar butt in the ashtray, in the car. Checking in the next morning, while there was still some odor there, as would be expected, it was significantly less than normal. I removed the sand and ashes, added some more powder, and later that day had someone actually compliment me on the smell in the car!

At this point I’ve developed a bit of a system for best results:

I always have some sitting in my ashtray indoors ready for when I smoke.  Afterwards I empty the ashtray, and then re-add some more sand.  The sand absorbs the ash odor while the ashes are in, and absorbs the room odor when not.  It works really well and we’d definitely recommend picking some up if you’re having a problem with odor indoors.

Have questions? Ask us in the comments or email our new friend Michael at sales@whiffindustries.com